Today, I am going to a concert in Prague. Naturally, while travelling by train, I am taking my laptop so that I can get some work done while traveling. The only problem is that the area, where the concert is going to be, does not allow notebooks, so I have to store it somewhere. The first part of this post is written while traveling to the destination, the second part will be amended after I successfully return home from the concert and regain my laptop.

Before travelling, I have made sure to look for options where to store my laptop, so that I make sure that I will see it again. In this section, I describe the information I found on the web, but beware that this information (as evidenced by the post-Prague section) was not very accurate.

What do I need?

The train is going to arrive to Prague at about 12:00, and I am planing on going back at about 4:00. I do not plan to use the laptop while I am not traveling by train, so I want to store it from 12:00 to about 3:00. The best option would be some kind of self-serving storage box, possibly with a PIN set, so that I can access it multiple times throughout the day if I need to store something more. Also, the closer to the train station, the better.

Where do I store it?

When searching for storage options on the Internet, I have come across a few different solutions. Let’s examine them now one by one:

CubeSave/Travel Box are self-serving boxes located directly at the main train station. All these boxes are supposed to be protected with a PIN, with options to book the boxes for 6 or 24 hours, while the 24 hours option is supposed to cost 125 CZK for a small box. This seems like the perfect solution, but it may be unusable due to all boxes being possibly occupied at the moment of arrival.

This storage service also provides a mobile application. With this application, the boxes can presumably be reserved after registration.

Side note: when verifying a registration email for the application, the verification link points to app.cubesave.cz. The login information provided in the app also work on this webpage, but upon login the only thing that is shown is a “permission denied” error, while the app seems to work just fine. Maybe this webpage is only for CubeSave admins and should not be presented to the regular users at all? 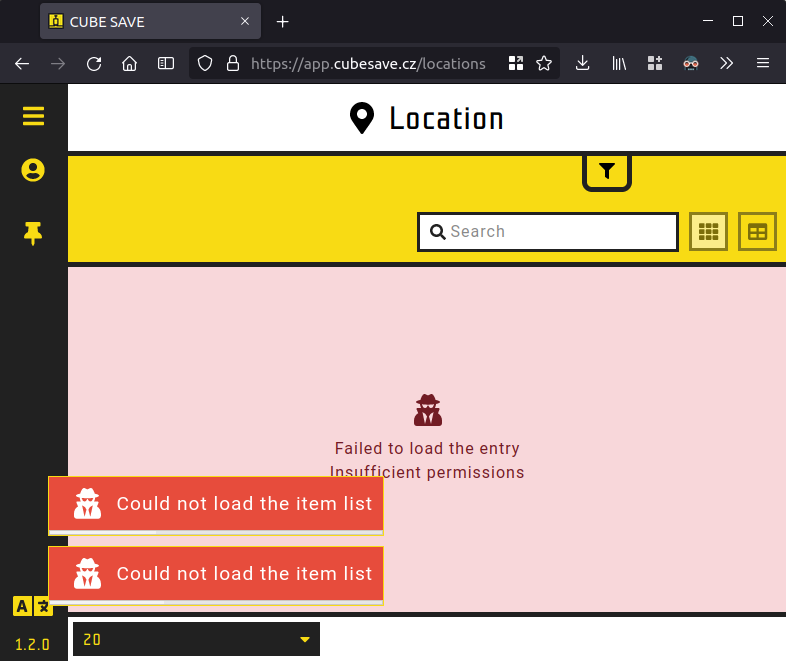 Screenshot after logging into app.cubesave.cz

One thing, that does not encourage my trust in this service, is that when accessing a secure version of Travel Box, the user is greeted with an invalid certificate made for the domain *.vshosting.cz.

According to their website, Luggage Storage Prague has an open branch at Masaryk railway station, which is about 10 minutes of walk from the main train station. This branch is supposed to be open from 03:00 to 23:45 and contain self-serving boxes. According to the current prices, storing a single luggage should cost 175 CZK when stored for more than 3 hours and less than 2 days. Even though this location is a little further away, it still can be my second choice in case that Travel Box will fail me. 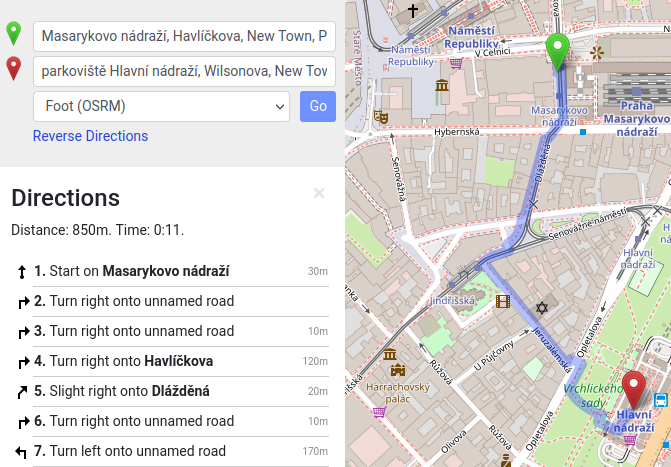 Walking route from Masaryk to the main railway station, OpenStreetMap

While looking for the perfect solution, I have come across a few that did not suite my needs, but my serve someone else’s, so I am including them nonetheless.

As I remember, inside the main train station, apart from the TravelBox’s, there is another set of self-serving boxes. I have used them a few years ago, and I certainly do not remember their opening hours, they are there nevertheless. They are supposed to be located in the north-most section of the station, but I fail to find any mention of them on the Internet.

In case everything would fail, I have though about – a little complicated – backup option. In the case that I would fail to find a solution that would meet my needs, I would go to a paper store and purchase a box. Then, I would put my laptop inside the box and send it through Packeta to a pick-up point near my home. Sending a packet through Packeta can be done from almost any smaller shop. Typical delivery time of the packet is about 2 days and with a price of 79 CZK it is the cheapest option. Though, the package could possibly get damaged during transit, which is why this is only a backup option.

With all this preparation, I believe that I will be able to regain my laptop after the concert. I believe that the research I made will be enough for me to see my laptop once gain, yet I am still a little concerned, that something will turn wrong. Wish me luck.

Right after arriving at the main railway station in Prague, I wanted to rent one of the Cube Save boxes. On the station, there are two sets of boxes, both right next to the main entrance from the Opletalova street. However, there were two surprises waiting for me – the first set of boxes that I have encountered was out of order. 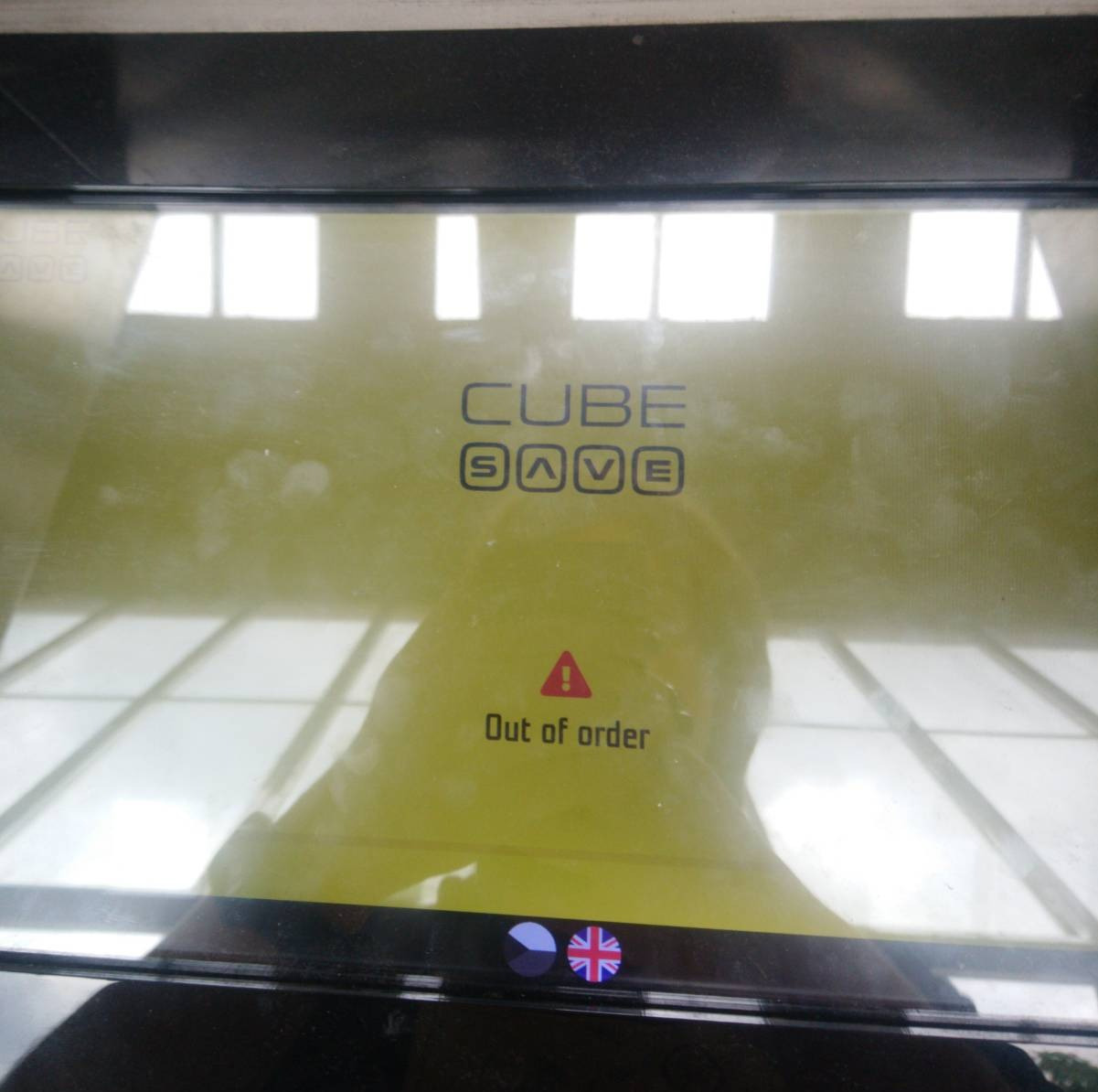 The out-of-order notice on the first set of boxes

This may be a problem, because now there is twice a demand for the second set of boxes, meaning that finding an empty box has become twice as hard. I have checked their mobile app, that indicated, that every box is now occupied. Nevertheless, I wanted to take a look at a working interface on the second set of boxes. Here I have found the second surprise: 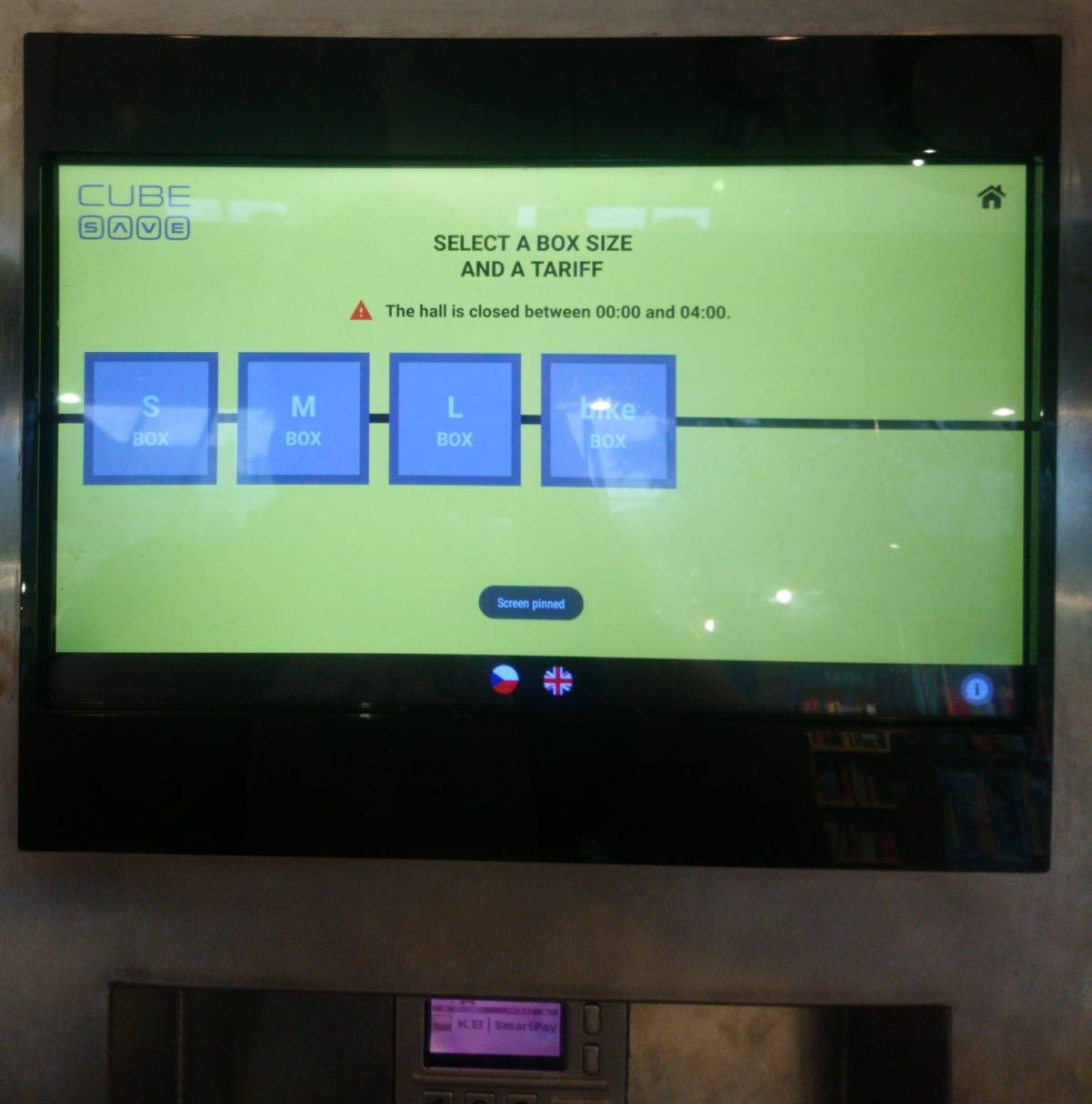 The box itself is technically opened 24/7, but the hall, where the boxes are located, is closed between midnight and 04:00. This information makes Cube Save completely unusable, because my train leaves at 04:12 and if more people will want to check out right after hall’s opening time, I will have a hard time getting on the train in time. With that, let’s move on to the second option.

Side note 1: I have also tried to take a look at the mysterious self-serving boxes, but, due to a large crowd and the hall being closed up until 04:00, I have decided that they are not a worthy option.

Side note 2: I have checked the app again at about 15:15, and it showed at lease one medium and one large boxes available.

My second option was the “most trusted Luggage Storage in Prague” (according to their About us section), so I knew I was in good hands. As previously stated, their boxes are not on the main railway station, but rather on the Masaryk railway station, though both stations are withing easily walk-able distance from each another. It is supposed to be open from 03:00 to 23:45, which is roughly exactly what I need. Surely, there won’t be any more surprises… 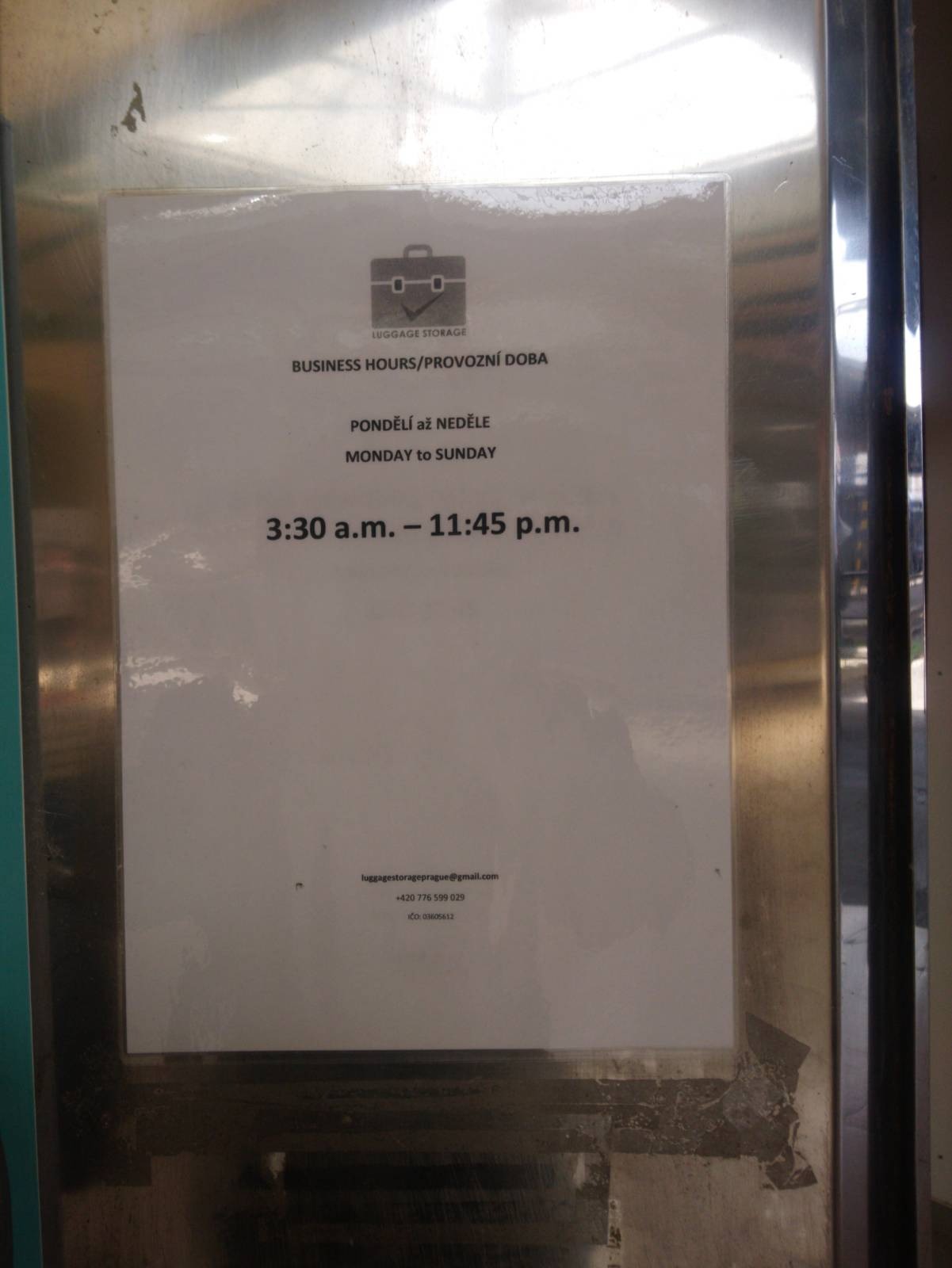 The opening hours as shown on site

The first surprise right when I have entered the location was that the opening hours differ from the ones listed on their website. They are opening a half an hour later than advertised. Though a little later than I would like, I have decided to continue, because I still could catch the train easily.

When operating with the interface, I was asked to enter my email address. After returning home, I have found out that the box has sent me a message with my pickup code (which has fallen into my spam folder). The same pickup code was also printed on a receipt that I have received after a payment, so the email is more like a backup option for when you misplace your receipt.

Still, there is one surprise left – the price. Their web says 170 CZK when storing for more than 3 hours. So what price options did the interface show? Prices for a small box

Because I needed more than 5 hours of storage time, I would have to opt for a 24 hours storage, which would cost me a total of 249 CZK, roughly 50% more than I have expected and twice as much as the Cube Save prices! Even after the trip, I am still unable to find any indication of this price on their website. After considering the possible issues of executing the backup plan of sending my laptop back home through Packeta, I have reluctantly accepted.

At 03:33 I have entered again the Masaryk railway station and entered my pickup code. The box has asked me if I am only visiting the box or already checking out, which is neat and this feature should be advertised more beforehand. Because I had no intention of returning, I have chosen to check out. The box has opened, and I have seen my laptop once again. 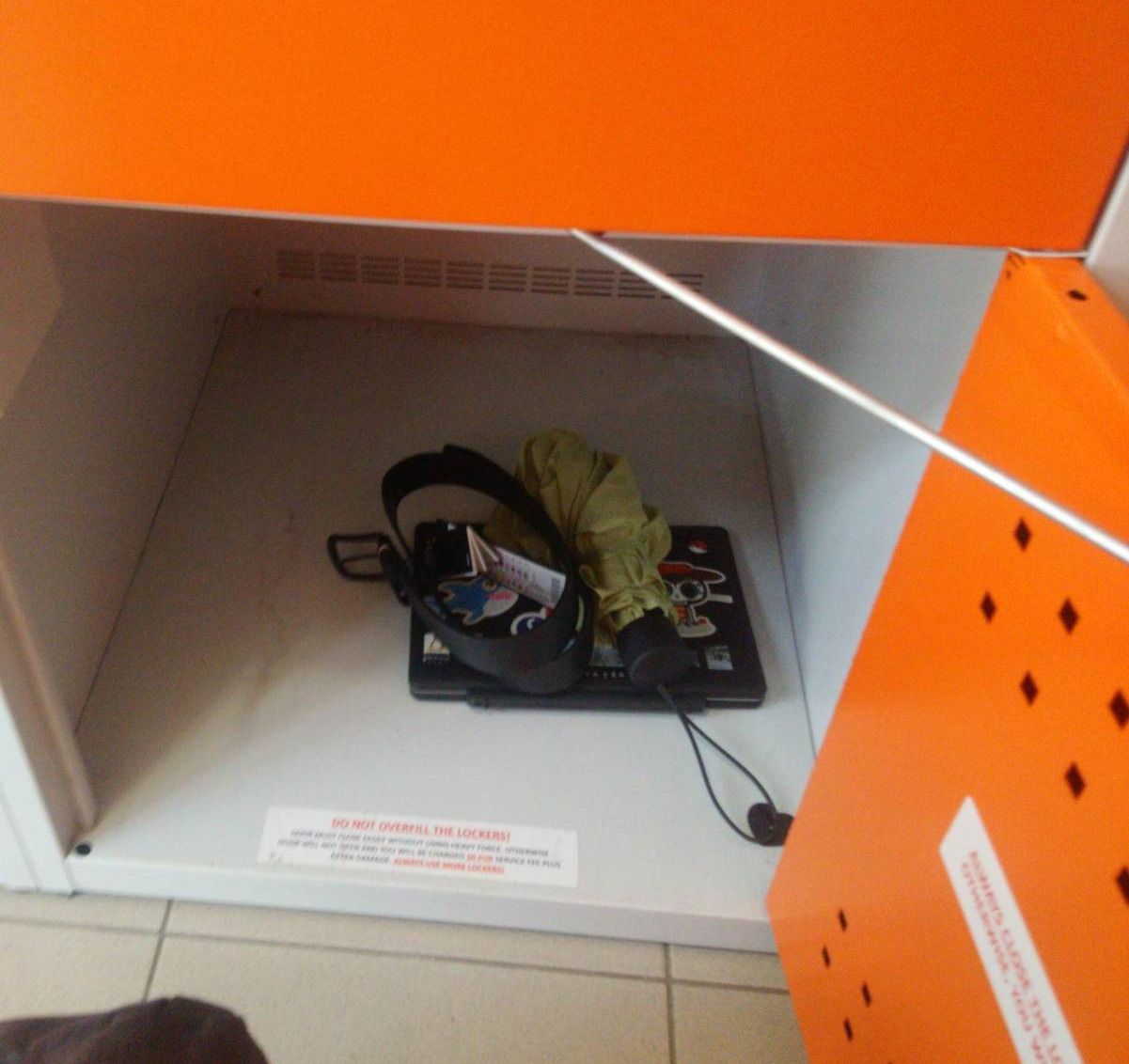 From the Masaryk railway station I have taken a bus that departed at 03:49 from the station and arrived at 03:51 at the main railway station, to which I have entered at about 03:55. The main hall has already been opened, and no crowd was to be seen near Cube Save boxes, so I probably could safely leave my laptop there.

Even though I have successfully regained my laptop, after considering all the pitfalls I have endured when trying to find a place to store it and the overall price versus me using the laptop only for about 20 minutes during the whole trip in total, next time I will probably just take a book instead. On the other hand, it was a fun little adventure and I could visit the Masaryk railway station, which looks really nice, so (at least for me) it was worth it.